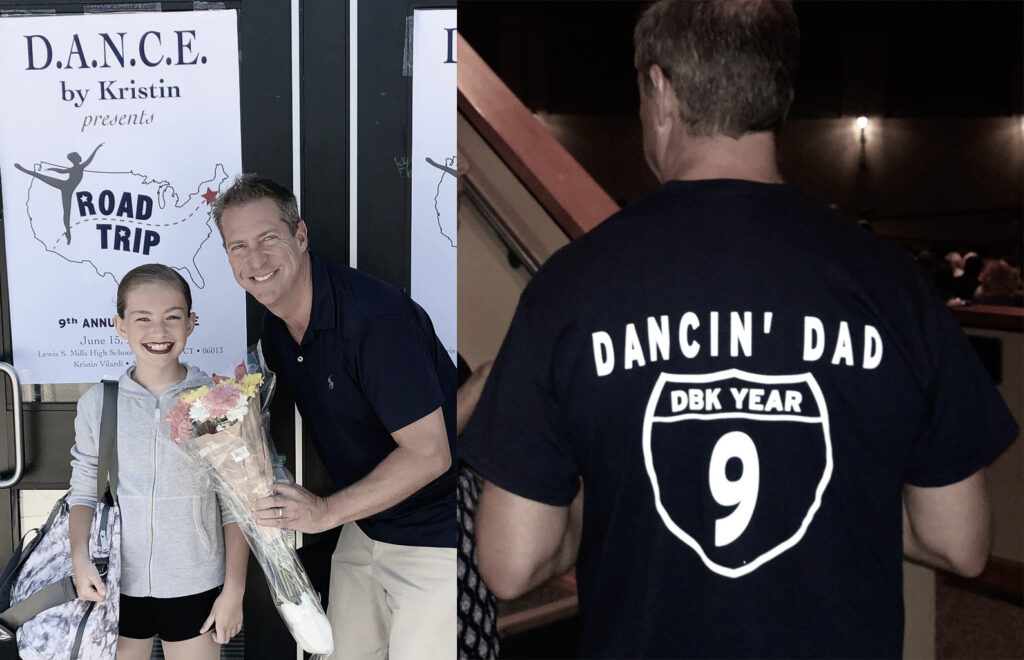 Allow your happiness to be a dance; to come alive and live out loud

It all started with a curiosity to learn something new.  My daughter asked to join a dance class at the young age of three.  She signed up and absolutely loved it. The group learned new dances and jumped around with new-found friends.  It was all fun and games until she realized she needed to spotlight all of the new skills on stage at an upcoming dance recital.   The joy that once filled her was replaced with the anxiety that comes with performing in front of an audience.

One day my daughter came home with a brochure, “Calling all Dancing Dads” interested in dancing in a routine at the recital.  As I read it, I immediately had butterflies in my stomach and blushed with embarrassment at the thought of getting on stage, not unlike my daughter’s.  My little girl asked me if I would do it. Even though I was totally insecure about it, I jumped at the chance to do this. I would do anything for her.  I was nervous about going on stage too and for something I had no business doing in front of others. We formed a pack that said, “if you go on stage, then I will too.”

Fast forward eight years and numerous dance recitals later with D.A.N.C.E by Kristin (https://dancebykristin.com) and I see the happiest little girl on stage.  She has grown up with such comfort, confidence, and pure joy while performing.  The pack we committed to and followed through on was a simple challenge, yet we both grew from our willingness to try new things and to overcome our fears. We came to new-found joyous places as a result.

A funny thing occurred when my wife called me out a few recitals ago, when I received my 5-year trophy, stating that “I think you enjoy this “Dancing Dad” bit as much as our daughter.”  This most recent recital made me realize she was spot on. I heard there was a possibility the “Dancing Dad” group was not performing. I admittedly felt bummed. Then like clockwork, an email came out again, “Calling for all Dancing Dads” and I asked my girl what she thought.  She giggled and gave me a big smile, saying, “of course Daddy, you guys are funny up there.” Her acceptance of me for who I am and my silly dancing around the house and stage, simply warms my heart. Besides learning some new moves, this new adventure helped me build an amazing connection with my daughter in a whole new plane. We talk about dancing and she guides me rather than the other way around.

When we least expect it, moments turn into movements

Have you ever been caught dancing?  Embarrassing right? Or was it liberating to show a little bit of yourself out in the open?

It is embarrassing for me, especially if you ever saw me dance.  After thinking about a specific time when I was caught dancing, my stomach sunk.  Although I thoroughly enjoy dancing, It was something I was holding in. The irony here for me is I seem to be my best self when I let myself dance out loud. It is empowering.

I have learned through experience that there is power in learning new things,  especially those that allow us to expand in totally new directions. We gain the most from learning things that really stretch our idea of who we are; things that make us feel vulnerable.  In fact, each story I share in this blog is a vulnerable moment for me that I am willing to share in the hope it will spark something in all those that read my words. Ask yourself if you are open to learning new things or even exploring without an expectation to be perfect?  Growth comes from taking actions, fumbling, stumbling and continuously improving in your quest to get better. The secret is finding the joy along these journeys and to know that happiness is never far away. Once you are ready to take a small step or risk, you are at the edge of your comfort zone and ready to jump in.   Each new experience, each difference welcomed, and each person accepted for who they are will add to the joy in your life. I call this zone the “Circle of Possibilities.” With curiosity and action, we can expand our circle to unimaginable places that are there for the taking, right in front of us. Simply following the comfortable path of the known is a sure-fire way to miss out on a world filled with possibilities.

Check out the “Leader” video (https://youtu.be/Z61W5d2ePpw) and look what happens when people authentically puts themselves out there. As you watch, think of where you have been that “lone nut” or the one viewed as crazy, a lunatic, an outcast and different.  It was actually someone dancing out loud and saying “I am alive” and not worrying what people might think. That is true vulnerability. When we least expect it, moments turn into movements. It all starts at that moment.

“The only way to make sense out of change is to plunge into it, move with it, join the dance” - Alan Watts

Join me in the dance.  In order for us to be ready to take action and change even a little bit, we need to become comfortable with not being perfect.  I love the intersection here. Just like dancing as a metaphor, we move to the rhythm we hear and we feed our thoughts with where we want to go.  You can feel the energy when you are connected with something that touches you in a new and different way. What is that for you? Spark and add fuel to that connection.  For me, it is finding happiness in unexpected places. Maybe it is joy, love, hope, creativity or something else for you.  Maybe try out a new artistic skill to stoke new thinking and childlike interest.  Be humbled and allow the feeling it creates within to come alive. Find the connections and take notice what you see around you.  Be open to it and build from there. Live and see your possible.

3 Replies to “Dance Out Loud”